Three English beers have Protected Geographical Indicator (PGI) status, meaning they must be produced in the particular region. 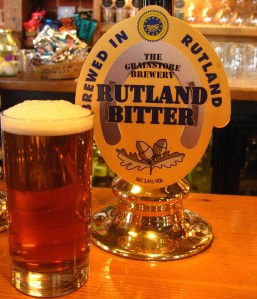 Rutland Bitter was formerly brewed in Langham by the Langham Brewery (Ruddle Way now marks the spot). Brewing in Langham ceased production when Greene King closed the brewery in 1999, but in 2010 the Grainstore brewery in Oakham resurrected Rutland Bitter. I’ve had the pleasure of drinking this 3.4% session bitter at the Grainstore tap where it is brewed in a converted grainstore next to the Rail Station. I wish it was available even closer to home.

The Kentish Ales are brewed in Faversham, near Canterbury, by Shepherd Neame which claims to be Britain’s oldest brewery. The origins of Shepherd Neame may go back at least to 1527. I’ve not had the pleasure of a Kentish Ale served in Kent, but the bottles are widely available; I particularly enjoy the stronger, raisiny Bishops Finger. (see also Lancaster Bomber vs Spitfire)

Newcastle Brown Ale no longer has PGI status. It was brewed at the Tyne Brewery from 1927 to 2005 but lost its status when the brewery closed and production moved to the south side of the river Tyne. It is now brewed in Tadcaster, North Yorkshire, about 90 miles south of the original Tyne brewery.

This entry was posted in Pints. Bookmark the permalink.