The 6th Cambridge Camra Octoberfest was held over Friday 12th and Saturday 13th October. Within an hour of opening on Friday evening it was packed with thirsty drinkers – the Saturday lunchtime session offered a more relaxed atmosphere.

Andechs Doppelbock Dunkel 7.1% – Despite attending both days, I somehow missed this as it sold out very shortly after it was put on, but it’s a particularly fine beer from a Benedictine monastery that has brewed beer for centuries – I’ll console myself with the bottle of it I have in the cupboard.

Aecht Schlenkerla Rauchbier Märzen 5.1% – A beer so full of smoked sausage flavours I have to remind myself that it’s “brewed according to the Bavarian Beer Purity Law of 1516” and is vegan friendly. Nevertheless, it is a strangely appealing beer that would be well paired with hot dogs on Bonfire Night.

Fässla Zwergla 6% – A dark lager that wasn’t here last year, it was the best of the German beers I tried this year. Smooth, medium-bodied with a good malty bite of chocolate digestive biscuits, went down really easy for it’s strength.

The Trunk Dunkel 5.2% was a bit over carbonated for me with only faint bitter chocolate and metallic flavours emerging – okay.

Amongst the British beers are several with German influences, including:

Blackbar Märzen – Brewed back in March especially for this Octoberfest, some of it made an appearance at the Cambridge Beer Festival in May. Since then the beer has developed even richer sweet, malty flavours. An interesting and enjoyable beer – I hope that come March another batch is brewed ready for next year’s Octoberfest.

Milton Schwarzwälderkirschesdunkelbier 5.5% – A Black Forest cherry dark beer? Tasted more like a fruity stout with some creeping sour cherry and bitter almond flavours in the finish. Very drinkable and the first beer to sell out.

Milestone Taeberry Bock 4.6% – Supposedly a German style bock beer although that wasn’t really evident in the taste. Plenty of fresh raspberry flavours from the tayberries though, nice enough.

There were around thirty other British beers available, including:

Hopshackle – Three beers from this consistently superb brewery. The strongest, 7% Double Momentum, was rich in sweet, resinous and fruity hops with hints of oak and all the flavours of a Battenburg cake, but pound for pound the Hoptane somehow packed the most punch, plenty of hop bitterness for a 3.8% golden ale.

Moonshine – Again, three from this local brewery. The 6.7% Chocolate Orange Stout was in great nick, not particularly strong orange flavours, but with a big bittersweet chocolate finish.

Red Brewery All Saints Ale 4% – a brewery that only started producing beer this year, about 23 miles from the beer fest, this was my first taste of their beer and it was impressive. Roasted and hoppy, good condition, a really quaffable beer and my beer of the festival this year. 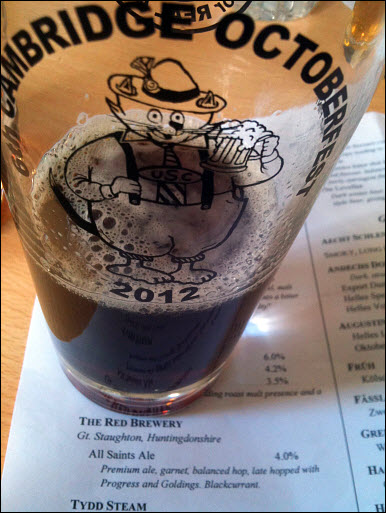 Next up, the Cambridge Winter Ale Festival from Thursday 19th — Saturday 21st January 2012.

This entry was posted in Beer Festivals, Cambridge and tagged Cambridge Octoberfest. Bookmark the permalink.