I flew a Tiger Moth at Duxford Imperial War Museum yesterday (Okay, I only had control of the plane for a tense few minutes, but that generously credits me with 20 minutes towards my pilot license. Or something). It was an exhilarating experience. Apparently these planes were used as training planes during WWII. I’d be verging on terrified if I had to fly a plane like this from A to B, but having to engage in combat? Unthinkable!

Later I watched from the control tower as a Spitfire took off. It was only fitting then to drink bottles of Spitfire and Lancaster Bomber in the evening. And if they were engaged in combat? 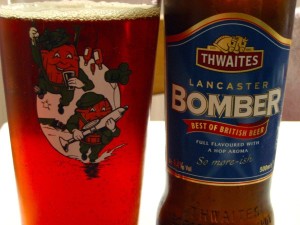