This was a 19th century pub originally called The Light Dragoon or Light Horseman.

It became known as The Barking Dickey, a Norfolk phrase for ‘singing donkey’, after the badly painted sign that looked more like a braying donkey than a horse and soldier!

It is one of only five remaining thatched houses in the city that survived the devastating fire of 1507.

The Bird in Hand, Trent Vale, Stoke on Trent

In the 1960’s, this pub on London Road was one of the first pubs my father used to drink in. As well as a pub sign, the building has an art deco sculpted sign on the wall which gave it the nickname The Swinging Tit 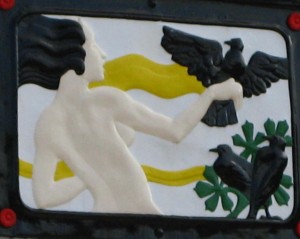