Poppyland Brewery reached its first anniversary a few days ago, a year of “extraordinary ales using local ingredients”. These have included beers made with hops smoked in an old Cromer Smokehouse, “wild landrace hops gathered from nearby ruins of medieval monasteries”, locally picked flowers and fruit, and barley from nearby Branthill Farm. And they do taste extraordinary. 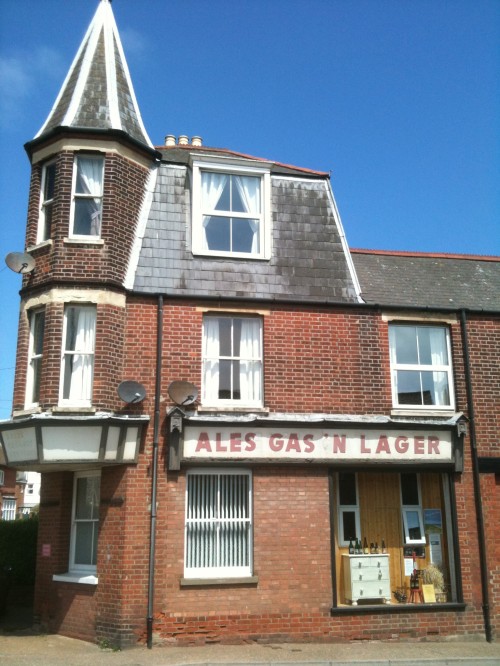 The brewery is located in the Norfolk seaside town of Cromer, a short walk from the beach, on the corner of West Street and Cabbell Road opposite the fine red brick and flint Methodist Church. Part of the brewery building was previously Allen’s Garages, the letters on the sign rearranged as ‘Ales, Gas ‘N Lager’.

When I visited the brewery, Martin was bottling Dr Rudi’s New Zealand Saison, described as either a “massively hopped Belgian saison” or an “IPA brewed with an ascertive Belgian saison yeast”. Neither description would have prepared me for the intense burst of lemony citrus, refreshingly sharp with a growing sourness and bitter, dry finish. It’s a beer that seizes the senses. 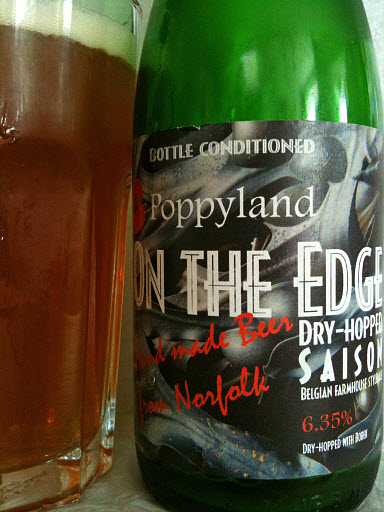 It follows the farmhouse-in-a-hop-field theme of the earlier ‘On the Edge’ saisons, one hopped with Bobek, another with Cascade & Hersbrucker Hallertau – the Poppyland saison I’ve enjoyed most, well hopped, citrus and floral, the slight tartness balanced with caramel sweetness, perfect on a sunny day. The Crab Apple Saison offers another twist. It’s been a long time since I bit into a crab apple, but the beer is as mouth puckeringly sour, tart and acidic as I remember them tasting. 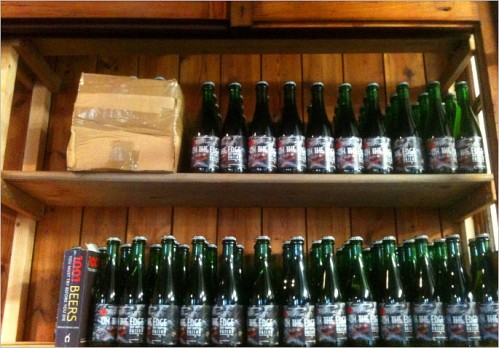 Smoking hops
The first Poppyland beer I tried remains my favourite. It uses not only smoked malts, but hops smoked in a Cromer smokehouse that’s over 150 years old. Each bottle of Smoked Porter has revealed experiments with different smoked hops and variations in the strength of the beer. I found the 5.7% the richest experience, but most recently opened a bottle of 5.4% and was unexpectedly greeted with lively fresh hop aromas in a cloud of oak smoke, piney hop flavours, smoky sap and coal tar, a wonderful beer. The smoke and tar thickens in the stronger Ten Thousand Geese, a beer which seems to have absorbed the salty sea air. The whole range of beers are free of finings, so vegetarian friendly – no crabs were harmed for the Crab Saisons – although in the same way vegan rauchbiers can impart smoked meat flavours, the smoked beers do carry homeopathic proportions of cured fish in flavour and aroma only.

The Sour Plum Porter also uses smoked hops, though the aroma of smoke, toast and hops again doesn’t quite prepare the senses for the depths of flavour – vinous, stewed dark fruits laced with smoky resin, a creeping sourness, acetic and dry. I savoured each mouthful until I was short of breath. 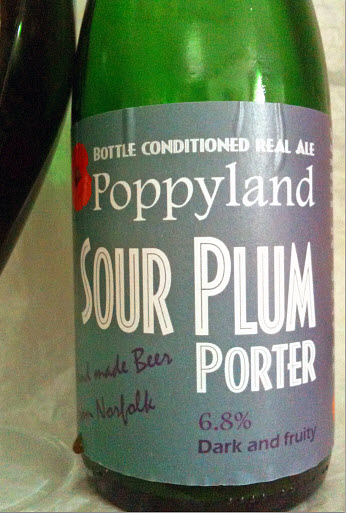 Only 36 bottles of Sour Plum Porter were made, so I’m unlikely to try it again, and it’s unlikely any casks of Poppyland beer will turn up at pubs or beer festivals. As I understand it, there are no plans to grow or to make the beers more widely available. These are small batches of beers, each a search for new sensations. They are however available direct from the brewery and a small number of local outlets, and online from Beautiful Beers.

The latest brews include big IPAs, an Imperial Austrian Porter and a Dandelion Saison. Here’s to another year of Poppyland’s extraordinary ales…

This entry was posted in Brewery, Norfolk. Bookmark the permalink.