The 42nd Cambridge Beer Festival begins on Monday 18th May and runs through to Saturday 23rd. 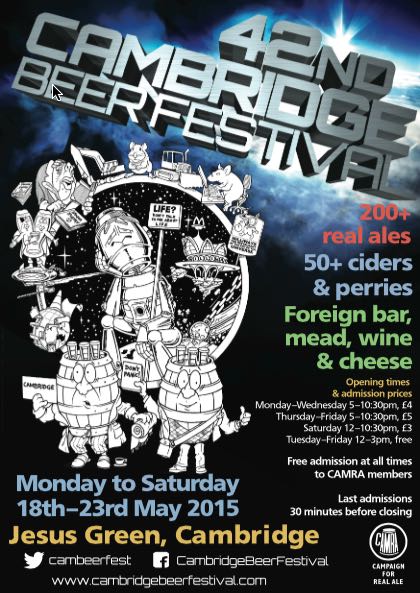 There’ll also be around 50 more beers from overseas, over 60 ciders and perrys including some from 11 Cambridgeshire cider makers, along with 10 meads, and a selection of English wines.

The beers brewed nearest to the festival come from Cambridge Brewing Co. less than 600 metres away. The British beers that have travelled the furthest come from Windswept in Lossiemouth, Scotland – just over 400 miles as the crow flies, over another 100 miles by road.

As this is the 42nd Cambridge Beer Festival, a few beers are named after the Hitchhiker’s Guide to the Galaxy (42 was the answer to “The Ultimate Question of Life, the Universe, and Everything”) – the author Douglas Adams was born in Cambridge, and was a student of St John’s College from 1971 to 1974.

Moonshine’s latest beer ‘5th Moon’ is made using barley grown on the farm in Fulbourn where they’re based. The barley is a new variety called Irina, and it’s apparently the first time a beer has been brewed using it anywhere in the U.K. Moonshine have won beer of the festival on three occasions and always prove popular – on one evening last year, 9 gallons of Moonshine’s ‘Heavenly Matter’ sold in under 11 minutes.

Milton have a special version of their Marcus Aurelius imperial stout, enhanced with port from the Quinta de la Rosa vineyard.

Two previous ‘Beer of the Festival’ winners return this year – Brentwood BBC 2, winner in 2012, and Moonshine Red Watch Blueberry, winner in 2005. There are also a couple of beers that have won the award at the Cambridge Winter Ale Festival – Elmtree Nightlight Mild (2009) and Sarah Hughes Dark Ruby Mild (2008)

There’ll be a good choice of unfined, vegan-friendly beers, including:

Turn up the heat

If you like your beer hot, there are a couple of beers brewed using chilli peppers – Binghams entry level Hot Dog Chilli Stout carries a “warming afterglow” of chilli, while further up the Scoville Scale Bexar County’s Hop Damn is “brewed using the Holy trinity of Mexican dried chillies and dry chillied with habaneros”, and is “not for the faint of heart”! If that’s your thing, in the Food Hall the Merry Berry Truffles & Chocolates stall has bags of the lethal Scorpion Death Chilli Chocolate. If you still have taste buds to torture, in-between beer festival sessions, head over to the Maypole, a freehouse just 5 minutes away, holding a beer festival which includes Hand Drawn Monkey’s Siamango Chilli beer, a mango, lime and chilli IPA.

Turn down the volume

The three beers with the lowest ABV manage to be low in alcohol without being short of flavour – Weird Beard Dark Hopfler and Brentwood BBC 2 both at 2.5% ABV, and Three Blind Mice Table Liquor 2.8%.

And if that hasn’t convinced you to visit, there’s always the cheese stall 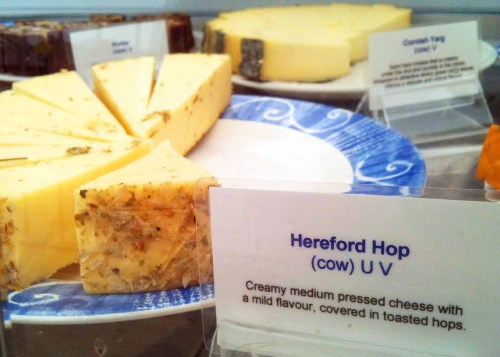 Amendments to the programme

The following beers will not be available:

Moonshine Brewery made it’s second appearance, going on to win overall Beer of the Festival for the second consecutive year! 2005 saw the first appearance from Moor brewery, joint winner in 2013 with Old Freddy Walker, another two beers from them this year.

Brew dog’s Punk IPA was being served straight from the cask and weighed in at 6.2% ABV – it’s now 5.6% and is no longer available on cask – while Thornbridge Kipling and Jaipur were voted 1st & 3rd best beers overall.

This entry was posted in Cambridge Beer Festival. Bookmark the permalink.