The Salisbury Hotel, first licensed in 1886, closed in 1973 with owners Whitbread securing planning permission to convert it to three separate dwellings. When the pub and its license were put up for sale the following year, it was bought for £22,000 by CAMRA Investments, a sister organisation to the campaign itself, whose objective was to acquire and run a chain of traditional pubs serving traditional beer. Prior to reopening in 1976 only three breweries provided real ale in Cambridge, but this increased to ten under its new ownership, including the likes of Sam Smiths and Batemans, 180 gallons from each being served in the first few days, no doubt helped by the first 1,000 pints being free (for comparison the Pint Shop recently offered 50 free pints at their reopening, although to be fair costs were probably similar), alongside Adnams, Bass, Charles Wells, Elgood’s, Greene King, Hannan, Marston’s and Ruddles, and “possibly the largest selection in the country of bottle-conditioned English and Belgian beers”.

Fast forward forty years and the Salisbury Arms, under present owners Charles Wells, had only two of four pumps in action when visited, giving a choice of Directors or Young’s Bitter, although at least among the eight keg usual suspects was Young’s London Stout, a decent drink and my default choice in most Wells pubs. The Directors was good enough for a pint. And they say CAMRA’s battle has been won. 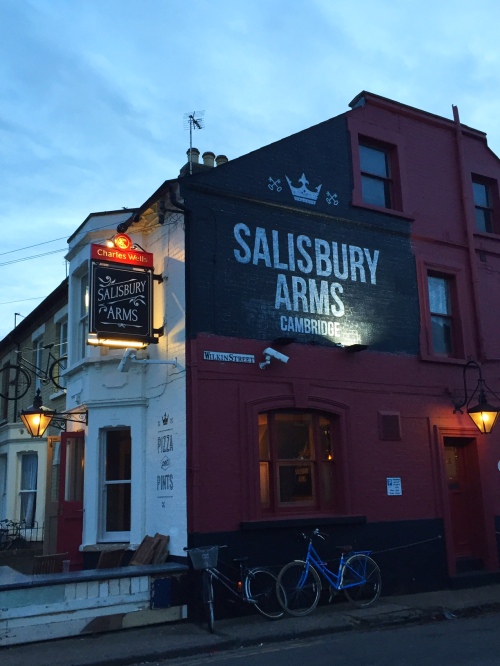 ‘Real ale men’ might have found their haven back then, but a student guide at the time offered this review of the Salisbury:

“CAMRA pub, which means exquisite beer, and cohorts of bearded, pot-bellied beer bores. Don’t try to rip off the glasses. CAMRA know social parasites when they see them”

Two years on from the most recent refurb, the interior is beginning to look more naturally worn rather than intentionally distressed. The high-ceiling of the lounge, achieved by the removal of a complete floor of the former hotel, and lower floor level gives the pub a spacious feel, the large room opened out to the former public bar on the low-ceilinged upper level, apparently once only accessible by going outside the building and back inside through another door almost side by side. A small side room leads to an outdoor courtyard where a wonderful old mirror sits exposed to the elements.

Thankfully, the beer festival posters and ring the bull have survived successive refurbishments. Surprisingly, there’s nothing to commemorate the Salisbury being the place where in 1908 Cambridge City FC was born

The most recent refurbishment branded it as one of Charles Wells ‘Pizza Pots & Pints’ concepts based around wood-fired pizzas, one-pot meals (aka mac n cheese) and “an excellent range of local beers”, which stretches the definition of local beyond CAMRAs ‘Locale’ definition, the Bedford brewer of Young’s Bitter and Directors located over 30 miles away by “the shortest driving distance”. Then manager Sam Adams (yes) has since moved to roll out the brand at Peterborough’s Queen’s Head. Meanwhile, after opening a fourth Pizza Pots & Pints in Hitchin’s Radcliffe Arms, Charles Wells are continuing to expand the brand after acquiring another site in Cambridge… sometime early next year (tbc), the Carpenters Arms on Victoria Road will see its current menu of wood-fired pizzas replaced with a new menu of wood-fired pizzas. Progress is unstoppable.

This entry was posted in Cambridge Pubs. Bookmark the permalink.